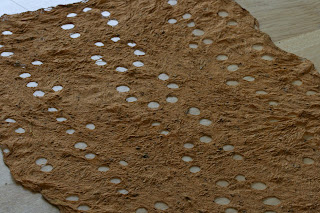 When I woke up I said, "I think I'll make today a lazy day...because it'll probably be the last one I have for about 7 months."  So far, this morning has yielded nothing but one technological innovation after another.  Take a look above.  I know...the image is a little dark.  Just think of it as one of those satellite spy photos.  Any idea what's occurring there?  Go on...take a guess.  Still no clue?  Sorry, but I'm not going to tell you.  You'll just have to take my joomchi workshop at CMA in June, where all tricks and discoveries will be revealed.  For now it remains the studio equivalent of a "state secret".  I wonder what else 2014 will bring?  Maybe something awesome (wink).

And here's a juicy little detail from a piece currently in the works.  Should be done within the week.  Should. 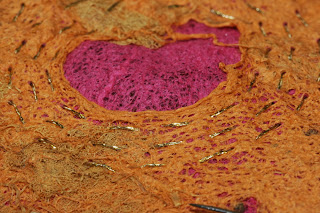