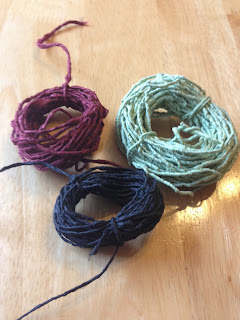 Paper singles.  Some spun with the aid of a bobbin winder, some on a drop spindle.  They're a little slubby, but that's fine with me.  It would go a bit easier if my spindle was significantly lighter, though. 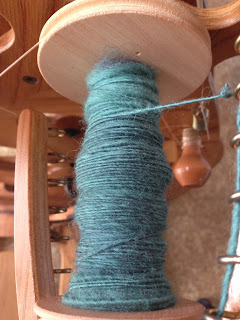 I had a lot of blue already carded, so I decided to spin it on with what was leftover from plying the other day.  At the top of that bobbin you can see how fluffy my yarn was when I was initially getting the hang of it.  The lower three-quarters show how fine I'm spinning now.  Some of it is like sewing thread.  Awesome-O. 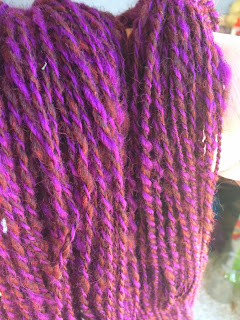 The two big skeins above were the last of the past week's plying.  The helper monkey has designated it "mixed-up purple-brown".  I also spun up several singles for tomorrow night's demonstrations.  My back and shoulders are very sore.  No more spinning wheel for a few weeks.
Posted by Bill Lorton at 4:29 PM